Hello, and thank you for visiting the site, my name is Dan Shauger. I’ve been teaching golf for many years here in the Los Angeles area. I am a disciple of the incredible Michael Austin, holder of the world’s all-time record 515 yard drive.

He set this record at the age of 64 using a steel shafted wooden headed driver and a wound Balata ball. Anyone who was ever hit the old ball with the old club knows what a phenomenal feat this is. There’s no telling how far the ball would have went if it were the new hot ball hit with one of today’s modern titanium drivers. I called him incredible because he truly was, not only was he the most powerful ball striker ever, but he knew exactly how his swing worked and if you had the time and patience he could explain it to you. Fortunately for you, I had the patience and for more than 25 years picked his mind for the details of how he did it.

It took me these 25 years because he explained it in medical and scientific terminology to be certain that I understood precisely what he meant. I had to school myself as to what his words meant with the names of all the bones and muscles and the terminology as to how they moved. Psupination, pronation, radial flexion and palmar flexion were but a few of these.

By a gift from God I have been blessed with a mind that enabled me to grasp these concepts and explain them to you in common language that makes the description of it easy to understand. While many people have told me that I am a fine instructor in my own right, and by interpreting what he meant into layman’s language have improved the way that it’s taught, I always give credit to the genius who taught me 90% of what I know. Without him I would’ve never have learned this on my own. My dear friend and mentor has passed on now, but his legend still lives on.

Michael used this perfect swing and executed it perfectly on the day that he hit that 515 yard drive. That’s why the ball went that far. Not only does the perfect golf shot produce perfectly controlled flight to your ball as to trajectory and curvature it also produces your maximum distance. Everyone has his or her maximum distance and it is likely that we will not hit the ball 515 yards, nonetheless we can attain our own maximum power.

All of this while doing no harm to your body because the motion works in harmony with the body’s design and not counter to it, so that you can hit long and powerful golf shots until very late in your life. Even now at over 72 years old and with several body parts that don’t work well due to injuries received during my years as a construction worker I can still hit the ball 280+ yards. I am absolutely certain that I can make you hit it farther too, since have taught thousands of people how to hit the golf ball farther and more accurately. I have trained other instructors in how to teach the method including long drive competitors and touring pros around the globe. While having some differences to the commonly taught motion, the swing is entirely logical, it is not a theory, and easy to do once learned.

What surprises most people is that 99.5% were able to learn it and most got it fairly quickly. No one who has learned it will ever go back to his old method. Due to the human condition there will always be a small percentage of people who either do not have the ability to follow simple instructions or have a physical or learning disability. If you fear you are one of those people, fear not because it is likely that you are not.

To be certain that the money you spend will bring you the results you expect, I guarantee everything that I teach to be learnable by you, 100%

If you only give it a fair try. I give you a 60 day guarantee from the date you order any of my materials to return it for a full refund. Remember, the longer you study, the longer you get. 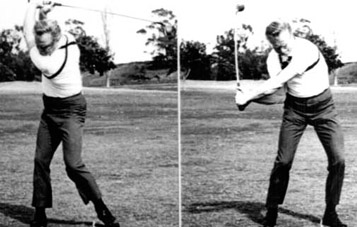 Who is Dan Shauger?

Dan Shauger is the best kept secret in golf. As a student, apprentice and friend of Mike Austin for over 25 years, no one has spent more time with and learned more from the great Mike Austin. Dan has perfected the teaching of the Mike Austin Method. 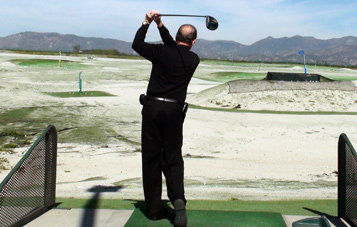 Dan has been selling teaching DVD’s with a money back guarantee for many years. With thousands sold over the years refunds have been very few and far between. We expect things to be the same here at danshaugergolf.com.